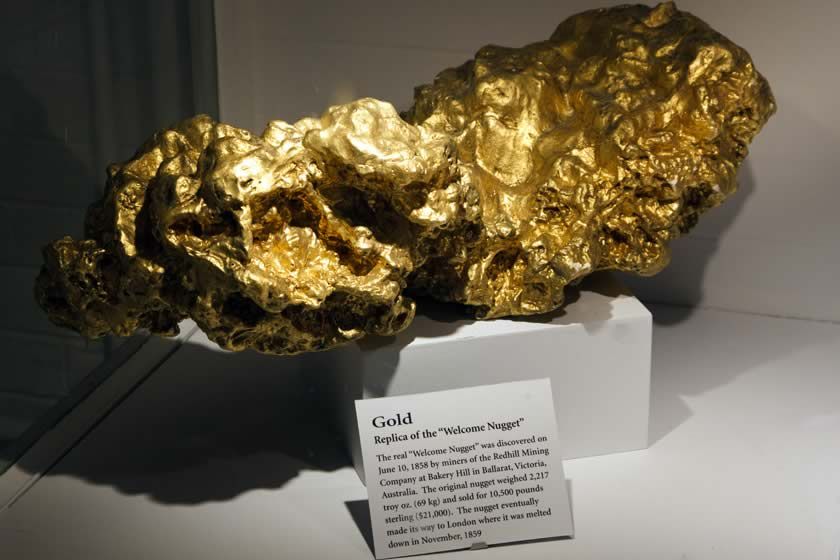 The original 'Welcome Nugget' was discovered on 9 June 1858 by a group of recently arrived Cornish miners of the Red Hill Mining Company at Bakery Hill in Ballarat, Victoria, Australia. Working on the night shift the discoverers took half an hour to haul it to the surface from a depth of 180 feet The finder, Richard Jeffery, took it home in a wheelbarrow and stored it in the oven until the morning.

The Welcome Nugget was unearthed near the NE corner of what is now Humffray and Mair Streets where a granite monument was erected. Today this is opposite McDonalds on Bakery Hill. It was the largest lump of gold yet found in the world and the second largest ever found. It was displayed in the gold office of the Union Bank at the 'Corner' in Sturt Street in aid of hospital funds and every mother who visited was allowed to seat her baby astride the nugget for good luck. It was 20 inches long, 12 inches wide, 8 inches thick, weighed 2217 troy ounces (69 kg) and was 99.6 pure gold. The enormity of it was truly wondrous.

Brothers, Julius, Isidor, and Joseph Wittkowski, arranged the sale of the Welcome Nugget for £10,050 and after exhibiting it to crowds of people in Melbourne, sent it to London where it was shown at the Crystal Palace until November 1859, when it was melted down and made into sovereigns.

A replica can be seen in the Ballarat Gold Museum opposite Sovereign Hill.

For a list of the biggest nuggets and the gold yields visit the Gold Monument in Sturt Street at Albert Street.

Finders of the Welcome Nugget