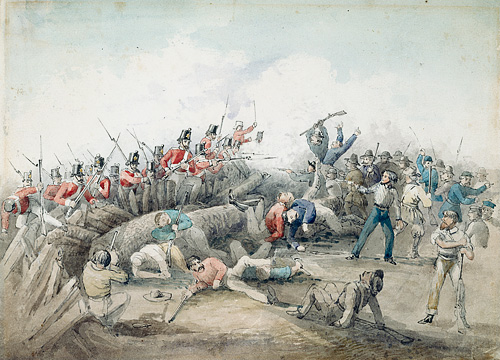 A list of the casualties from the 12th Regiment of Foot and short biographies associated with those who were casualties at the Eureka Rebellion.

Who were the Killed?

Private Felix Boyle, born Fermanagh Ireland, trade of carpenter, enlisted originally with the 10th (North Lincolnshire) Regiment and served with that Regiment for fourteen years, mainly campaigning in India. For this service he received the Sutlej campaign medal (1845-46) with the bar Sabraon and the Punjab campaign medal (1848-49) with the bars Mooltan and Goojerat. He was discharged from the 10th Regiment with a military pension. On returning to Ireland, he re-enlisted on the 26th August 1852 with the 12th Regiment in Belfast. Boyle arrived on troopship Empress Eugenie and disembarked at Melbourne on the 6th November 1854 and was stationed at Ballarat. Boyle was aged 32 at time of death on the 10th January 1855.

Private John Hall arrived on ship Camperdown and was stationed at Ballarat. Hall, labourer, born Kilkenny Limerick, had enlisted on the 3rd October 1853, and was aged 30 at time of death on the 31st December 1854.

Private William Webb arrived on ship Empress Eugenie and was stationed at Ballarat. Webb, labourer, born Hartfordshire England, had enlisted on the 6th October 1853, and was aged 19 at time of death on the 5th December 1854. (PRO3714)

What happened to the Wounded?

Lieutenant William Henry Paul took leave while posted in Launceston in June 1856 and returned to England.

Private Samuel Adair had enlisted on the 19th December 1853, one year before Eureka. He was promoted through the ranks to Colour Sergeant on the 1st November 1863, served in the second Maori war and took discharge in New Zealand on the 10th June 1866.

Private William Butwell transferred to the 40th Regiment on the 1st December 1855.

Drummer John Eagan, born Athlone Ireland in 1839, enlisted as a Boy on the 10th February 1852 aged thirteen. He was promoted to Private shortly after the Eureka Rebellion, but re-appointed Drummer in May 1856. Between 1854 and 1860, Eagan had been confined to cells on a couple of occasions and had also been on Sick Report in February 1860. Eagan was not sent to the Maori War in July 1860, probably because of his poor health. Eagan, aged 21 and single, died on the 8th September 1860 at Victoria Barracks Sydney and was interred in the Roman Catholic burial grounds. (NSW Death Certificate 1860 / 002463)

Private William French was promoted to Sergeant and served in the third Maori War. He returned to England with the Regiment on the 3rd May 1867.

Private Timothy Galvin was posted to Fremantle Western Australia in February 1856 from where he returned to Sydney in March 1863. Galvin, born County Cork, aged 36, died two months later at Victoria Barracks on the 13th May 1863.

Private John Smith committed a civil offence in Melbourne, was discharged and transported back to England on the 3rd December 1855.