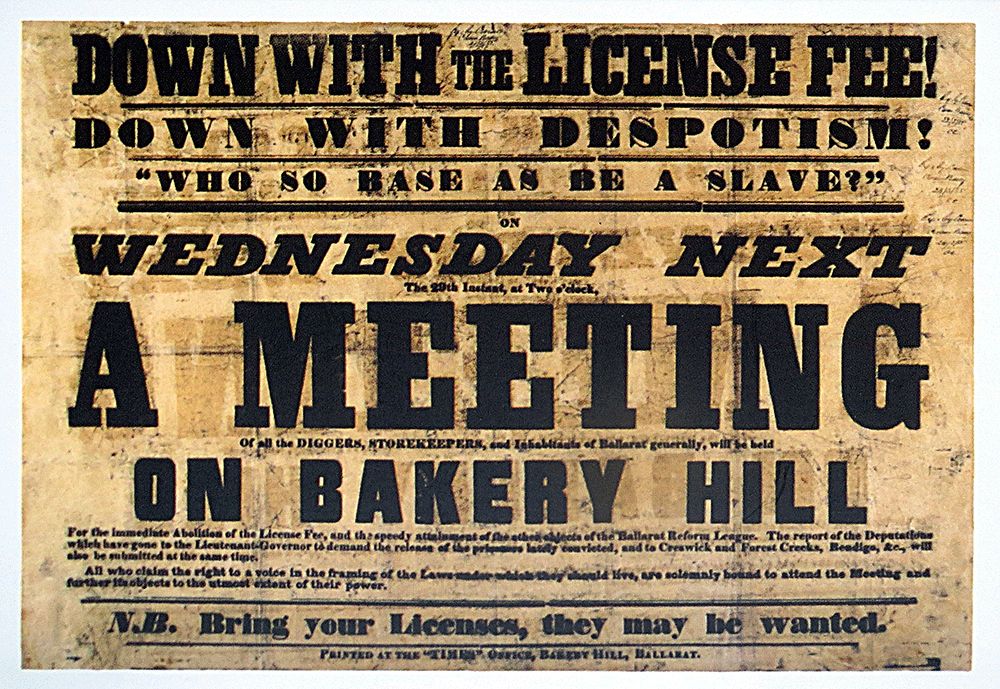 This poster advertised the meeting 'of all the diggers, storekeepers, and inhabitants of Ballarat generally' to be held on Bakery Hill on Wednesday the 29th of November 1854 at 2 o’clock. This mass rally was a major event in the lead up to the storming of the Eureka Stockade on Sunday the 3rd of December 1854. The day of the massacre is commemorated on every anniversary. Ballarat youngsters from an early age learn the story and participate in reenactments. Historic documents held at the Public Record Office of Victoria have recorded the facts, journalists of the day reported on the Eureka Sedition Trials, and the triumphant vindication when all those accused were acquitted. Since then, there is a continuing debate about the post-Eureka reforms and what actually brought them about. The very mention of the word Eureka in Ballarat today is enough for people to express strongly held views on one side or the other. It is rather like the American Civil War which has never really ended - people still identify with the cause of their choice.

Aura is a sound and light show at Sovereign Hill. This is a must-see experience for visitors interested in the Eureka story in the context of the history of Ballarat.

The Eureka Centre in Ballarat East from 2019 - formerly M.A.D.E. Museum of Australian Democracy at Eureka is a 2013 upgrade of the former Eureka Centre. The Eureka Flag which flew above the Stockade is held here on loan from the Art Gallery of Ballarat.